HomeThe coronacrisisPart VII: Has Mother’s Day thrown a spanner in the works for the slow reopening of our society?

COVID-19 requires a change in behaviour, and we are doing our best, but common sense is simply not enough.

Last weekend, we celebrated Mother’s Day, and it highlighted our yearning for social contact. As the corona curve flattens, and even falls sharply, the National Security Council has given the green light to merge two bubbles into one bubble. Who did you choose? Your mother, your mother-in-law or maybe both?!  It’s certainly not an easy choice, on the contrary. And maybe the decision was made for you before you really had a chance to think about it. Will the loose interpretation of the four-person rule just increase the number of infections again? There were already many people walking along the quays in Antwerp. Illegal barbecues were discovered, fined and shut down. Won’t we disrupt the exit strategy with our creativity?  We will know the answer in two weeks. Hopefully there were or are enough people with enough common sense to ensure not more than two bubbles were fused into one. Otherwise, we will throw a spanner in the works for the slow return to social life that we are all longing for.

What is so difficult about a slow exit strategy anyway?

In general, we have a very hard time adjusting our behaviour. This is precisely why behavioural scientists cannot predict how the population will respond to the relaxed measures in the coming weeks. Have the brakes been released? Is everyone still adhering strictly to the imposed rules? Or will it be mixture of the two? Are people afraid to return to the (new) normal? You may as well try reading tea leaves. We do not have a Crystal ball, and we also lack the data to make sound predictions.

What scientists do know is that we need a trigger or motivation to adjust our behaviour. Just look at people who want to quit smoking or lose some weight. Our New Year’s resolutions are also a good example. Without motivation, it is very difficult to sustain such challenges. Without the right motivation, intentions, agreements and rules rarely lead to the right result. Without rules, the result is poorer.

A behavioural change takes 21 days; your adjusted behaviour only becomes a habit on day 22. Unfortunately, we have been caught in the corona crisis now for 9 weeks, and we have to conclude that our deep-seated habits have not changed yet, despite the measures imposed. Consciously and certainly unconsciously, people are returning to the customs that have been part of our culture for centuries. Recently we saw Dutch Prime Minister Rutte shake someone’s hand. Ironically, it happened just after a press conference in which he had explained the measures for stopping the COVID-19 virus, including by no longer shaking hands. So there is a need for visual cues more than ever.

An international group of behavioural scientists has worked on these insights. They want to measure how citizens experience the measures against the spread of the coronavirus.  After filling in an online questionnaire, participants receive a personal score and advice (a trigger) that tells them how they can improve their score. With the results, the scientists hope to be able to better advise governments on future measures and information campaigns.

As user experience (UX) designers, the folks at Monkeyshot have a (professional) fascination for behaviour. Whether it’s the queue at the bakery, the efficiency of parking meters, or coffee machines: UX designers have a habit of observing everything. Therefore, during this health crisis, Monkeyshot has investigated how the individual actions of people can influence our own actions, as well as those of society.  In addition, they also looked for the triggers that work best to motivate or inspire people to adjust their behaviour.

To get started with human behaviour, Monkeyshot used the BJ Fogg Behavioural Model.

The BJ Fogg behavioural model illustrates the relationship between a person’s motivation and ability to do something, as well as the importance of a certain trigger to make the change work. Behavioural change can only take place when these three elements are present.

And what if we applied this model to Prime Minister Rutte’s hand-shaking gaffe? There was plenty of motivation; he had just explained that hand hygiene is very important in the fight against COVID-19. He also had the ability not to do it; physically, it is not so difficult to stop yourself from reaching out your hand. But there was no trigger to remind him. The World Health Organization (WHO) therefore created the “elbow shake”. For example, the WHO hopes to trigger people to stop shaking hands.

Design studio Edmire created the following “di-stence” stamp as a trigger to make it clear to people they must keep a distance in a queue. After all, keeping the distance is not difficult, but we need a trigger. It is only with a trigger that we will consistently apply the behaviour and keep it up. 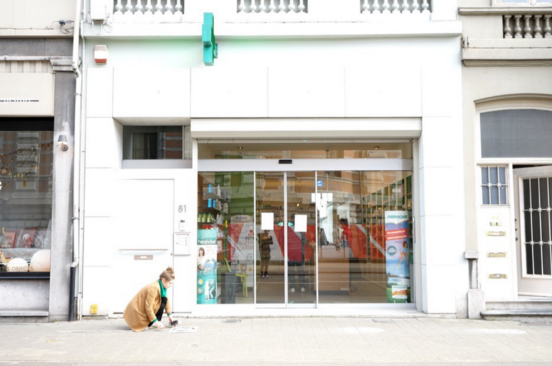 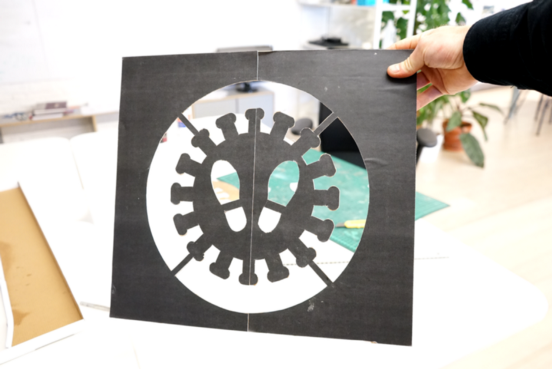 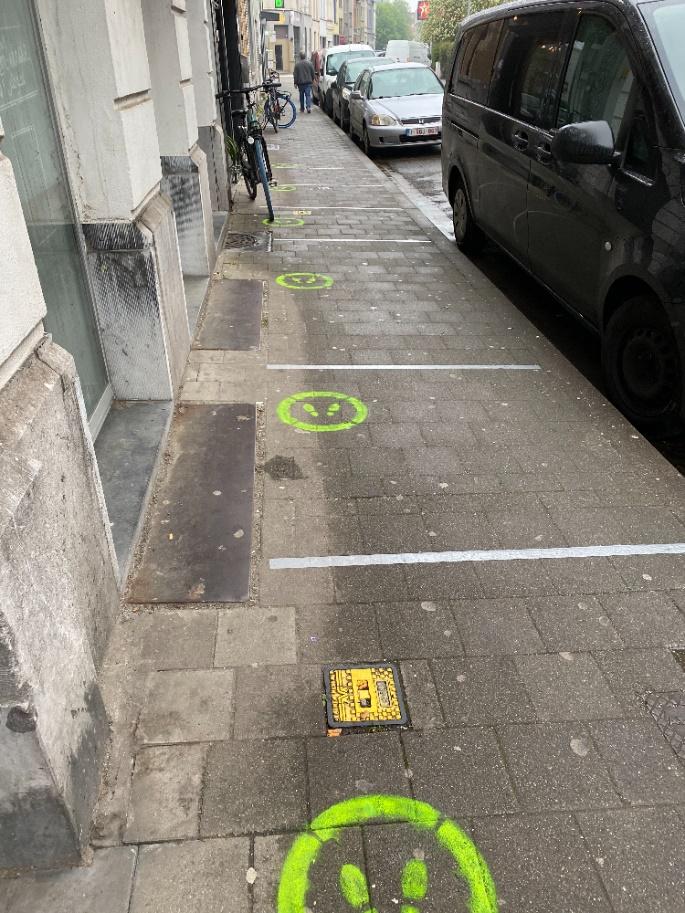 The only problem is that choosing the right trigger is not easy.  Fortunately, people in the public eye and people who set a good example can help, which is also known as social influence. Their behaviour and choices encourage other people to do the same. Consider, for example, the hashtag #flattenthecurve. At some point it was trending: the massive number of people using it no doubt had an effect on the number of infections. #Blijfinuwkot (#Stayhome in English) had a similar effect in Belgium (English-speaking countries). And commercials on TV with famous people saying that hand hygiene and social distancing are important certainly play an important role.

The hoarding and massive stockpiling of toilet paper, on the other hand, is an example of how social influence can have a negative impact.  Of course, politicians who flout the measures publicly do not help either. 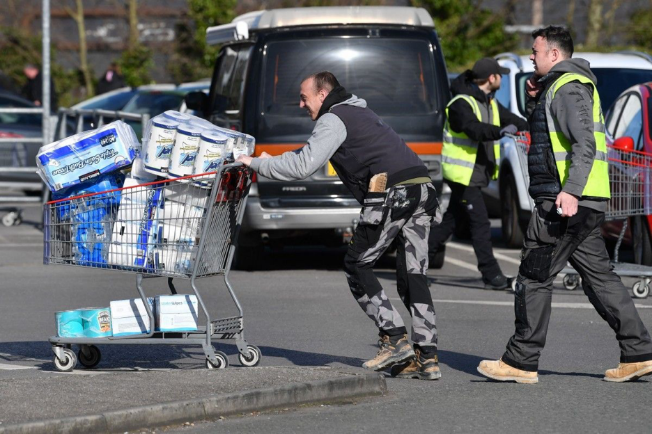 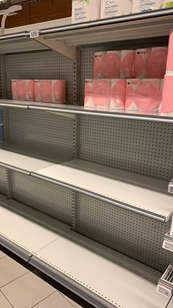 Step by step, towards the exit together

The fight against COVID-19 will stand and fall with our shared will and motivation to comply with the measures. Until now, the motivation has been concern or fear for the health of ourselves and neighbours.  We were rightly afraid of the possible implosion of the health system. In addition, police carried out extensive checks, and those caught flouting the rules risked a hefty fine.

But what now? The curve is flattening, the danger of the implosion of the health system has passed.  We are tired, we want social contact, and we want to “go out” again.  Can the government come up with new ways to motivate us? Can it communicate clearly how, as a society, we can continue to successfully deal with the restrictions of freedom, even if the checks have been partly dropped? Or should the motivation come entirely from ourselves from now on? If so, can the government still provide the triggers and the correct communication? The rule of four was certainly not an example of clear communication.  In addition, there is now the long-term perspective to take into consideration. What about exercising, holidays and going out to eat?

Until there is a vaccine, we will certainly have to live with the restrictions and measures. And it won’t be fun or easy, but there is no immediate post-corona era in site at the moment. So let’s just start assuming that we will have to stick to the rules, phase by phase.  Let’s believe that we are going towards the exit, step by step: forward when possible, backwards when necessary.

According to BJ Fogg, we need more than citizenship, common sense and intrinsic motivation. A social project can play a key role, as can triggering role models with who the population can identify.  This is how we can ensure positive “social influence”.  In addition, we must not forget how much we need creative, artistic and humorous communication that encourages us to persevere.

Isn’t it about time to come to a shared decision-making process instead of imposing rules from above? As a society, we must organise ourselves for the new normal. For example, employees would accept and apply restrictions much more easily if their representatives had negotiated them and if their supervisors set the example. Leading by example is needed more than ever to make sustainable change, and politicians enjoying barbecues with friends are just the opposite of what we need.  Now the curve is levelling, and we are moving towards the exit, it is high time to work together on the creative inclusive society of tomorrow. Let’s do it together, let’s go for it, together!

The Cronos Group - The CoFoundry Supporting platform for entrepreneurs

Leave a message for the author